Last month Spark Therapeutics (ONCE) reported initial results for SPK-8011, its hemophilia A gene therapy program. Despite their preliminary nature, the data are very positive and put Spark in a strong position vs. Biomarin (BMRN) and its Hemophilia A gene therapy, BMN270. Providing the signal is corroborated with additional patients, results may have broad implications on the liver-targeted gene therapy.

Spark disclosed data for only two patients who received a low dose (5×1011 vg/kg) of SPK-8011 and achieved 11% and 14% factor VIII (FVIII) activity after 23 weeks and 12 weeks, respectively. The company also disclosed that a third patient who received a higher dose (1×1012 vg/kg) had a higher FVIII expression but actual numbers were not given. Safety profile looks clean so far: No immune reactions, liver enzyme elevations or corticosteroid use were reported.

11%-14% FVIII activity is considered clinically meaningful (should obviate the need for chronic injection of hemophilia drugs), but the ultimate goal is getting patients to 40%-50% which is expected to allow patients to live almost normal lives without major bleeding events.

SPK-8011’s main competition is BMN270. BMN270 is expected to enter P3 in Q4/2017 based on a positive 15-patient P1 which demonstrated high (in some cases too high) FVIII activity levels. Although comparing SPK-8011’s activity with that of BMN270 is tricky (cross trial comparison, only two patients in Spark’s study etc.), SPK-8011 appears to be dramatically more potent based on the data for BMN270’s first two patients. BMN270 was given at doses that are 12-fold and 40-fold higher than SPK-8011’s initial dose of 5×1011 but FVIII activity was only 1-2% (see table below). 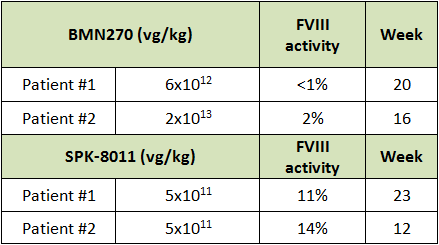 Spark’s PR stated that the third patient who received 1×1012 vg/kg had FVIII activity that was “proportionally higher, consistent with the dose escalation”. This patient probably has limited follow up but it would be plausible to expect a stabilized ~25% FVIII activity at week 12, which means Spark is very close to reaching its P3 dose that will likely be an order of magnitude lower than BMN270’s P3 doses (Biomarin is testing two doses in its P3).

Dose level as an important differentiator

While the relationship between dose, safety and efficacy in gene therapy is an evolving area of research, there is a consensus around the need to use the lowest dose possible. This is true for all drugs but especially relevant for virus-based gene therapy, which involves flooding the body with huge amounts of virus particles the body views as foreign. To put things in perspective, the second dose in SPK-8011’s study involves injecting ~70 trillion viral particles, double the number of cells in the human body. Biomarin is using ~3500 trillion (3.5 quadrillion) viral particles in its BMN270 study.

There are two primary reasons for preferring lower doses: Safety and variability.

Safety – In gene therapy there is a clear correlation between dose and an immune reaction against the viral capsid. The higher the dose, the higher the risk is for an immune response. This may lead to side effects as well as destruction of the infected cells  that resultssin loss of protein expression. In BMN270’s study, most patients experienced some ALT elevation and some required steroid treatment. Spark also reported liver enzyme elevations in some patients in its hemophilia B program (SPK-9001). Although most of these elevations appear manageable with steroids, they require frequent monitoring.

On top of near term safety considerations, there is also the long term safety aspect. AAVs were chosen as gene therapy’s workhorse because they rarely integrate into the human genome, however, integration may still occur at a very low frequency. These integration events, no matter how rare, may carry the risk of carcinogenicity (there are other mechanisms in place to prevent that like tissue-specific promoters). Because integration events are dose-proportional (more viruses, more potential integration events), physicians are likely to prefer gene therapies that can be given at lower doses.

Variability –Although there is not enough data to enable us to draw firm conclusions, it appears that variability increases with dose, which may result in excessive protein production in some patients. In BMN270’s study, there was a wide range in FVIII activity in the seven patients who received the highest dose (20%-218%), including patients who had excessive levels that may increase long term risk of thrombosis. The range was much narrower in BMN270’s lower dose (24%-41%), which may explain Biomarin’s decision to test both doses in P3. The error bars in the figure below demonstrate the clear difference in variability between the doses. 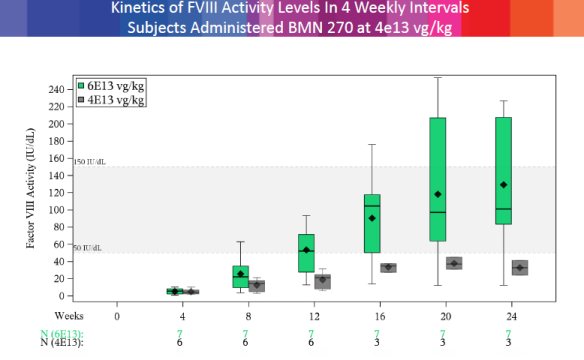 As gene therapies are given once and from that point are impossible to control, there is a strong preference towards a predictable clinical profile (especially long term expression levels). In fact, some physicians may prefer a predictable profile over expression level assuming there is clinically meaningful protein expression.

Best-in-class vector may be relevant for other liver diseases

SPK-8011’s data are still very limited and require further corroboration but the emerging profile is of a best-in-class hemophilia A gene therapy that will be safer, more predictable, easier to produce and require less monitoring. This alleged superiority likely stems from Spark’s decision to use an engineered vector (Spark 200) that appears to be superior to that used by BMN270 (AAV5). This demonstrates the crucial importance of vector design and probably the first data which demonstrate that an engineered vector can lead to superior outcomes compared to naturally occurring vectors.

If the data hold up, Spark 200 may become the vector of choice in liver-targeting gene therapies, which cover a broad range of diseases. This is a clear threat to REGENXBIO (RGNX), which is the dominant liver gene therapy player following the acquisition of Dimension Therapeutics (DMTX). REGENXBIO also controls rights to AAV8, its flagship vector for liver diseases. It would be interesting to see data from Shire’s Hemophilia A program (SHP654/BAX888) which utilizes REGENXBIO’s AAV8 next year.

I am selling Dimension Therapeutics following the acquisition by REGENXBIO and buying more AGTC (AGTC). I am also adding a second position in Kura Oncology (KURA), which reported positive results for tipifarnib in HRAS-mutated head and neck cancer last week. More on Kura next time. 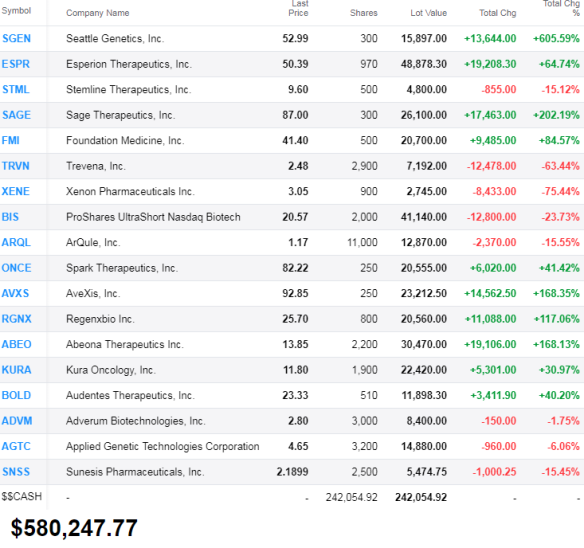