Readers of this blog know I have high hopes for gene therapy, a field with a checkered history but disruptive potential that may finally be ready for primetime. After two years of dramatic progress 2017 is shaping up to be a year of incremental progress, focusing more on establishing and validating results seen to date.

1) Liver – Biomarin (BMRN) and Spark (ONCE) generated impressive proof of concept in Hemophilia A and B, respectively. Neither data set was flawless (immune reaction, excessive experssion of therapeutic protein etc.) but the two studies clearly demonstrate durable expression of a therapeutic protein in the liver, a dramatic clinical benefit (bleeding reduction) and no alarming safety issues.

2) Ophthalmology – Spark is leading the way with what could become the first ever FDA-approved gene therapy. P3 data for Spark’s RPE65 program (Luxturna or voretigene neparvovec) were reported in 2015 and recently got published. They demonstrated a clear and dramatic improvement in night blindness and visual field. The company filed for approval in May and a decision is expected by January 2018. Beyond the therapeutic impact on patients, this trial proves that with local (subretinal) administration in the eye, gene therapy can deliver a meaningful and durable effect.

3) Neurology – Clinical validation is not as strong as in liver and ophthalmology but preliminary signs with programs from Avexis (AVXS) and Abeona (ABEO) are simply too good to dismiss. Avexis is developing AVXS-101 for SMA1 and Abeona is developing ABO-102 for Sanfilippo A, two genetic devastating disorders. Both companies give their respective AAV9-based products by intravenous injection based on the hope that AAV9’s can cross the blood-brain barrier and reach the CNS.

AVXS-101’s data (which I wrote about last year) are limited but very impressive from a clinical standpoint with an apparent dramatic effect on mortality and disability compared to historic controls. The primary weakness in Avexis’s data is the lack of a biomarker to prove the therapeutic protein is expressed in the target tissue. Abeona’s data (which I discussed here) is more preliminary but it demonstrated a clear reduction in disease biomarkers (Heparan sulfate, HS) in the CSF, which reflects exposure in the brain. Follow up is too limited to draw any conclusions about clinical benefit but there were some encouraging hints of efficacy in terms of cognition and behavior.

To me, the two data sets complement each other, suggesting that AAV9 can get into the brain and express meaningful amounts of therapeutic proteins.

4) Hematology – Bluebird Bio (BLUE) is a bit of an outsider because its technology involves a process more similar to stem-cell transplant (reprogramming cells ex vivo) using an integrating virus (lentivirus) whereas most other gene therapies are based on administering AAVs (adeno-associated viruses) locally or systemically. In that sense, CAR-T and TCRs can also be regarded as gene therapy products.

Bluebird’s platform proved very effective in beta thalassemia where its lead program, Lentiglobin, was able to generate significant levels of hemoglobin and decrease dependence on blood transfusions. Unfortunately, the company could not replicate these data in sickle-cell disease (SCD), a related blood disorder.

Despite the tremendous progress the industry has made with gene therapy, it should still be regarded as a high risk field given its infancy. It is important to note that all these positive data sets include a small number of patients (tens at best) and limited follow up (in some cases less than a year) so a lot of things can still go wrong.

The primary challenges (and risks) are:

This is why I prefer the “basket” approach of having a diversified portfolio of as many gene therapy stocks as possible. There are simply too many unknowns and too much complexity around key factors such as viral vectors, transgene design, indication and route of administration that make it very hard to identify the winners.

For the remainder of 2017, investors shouldn’t expect major breakthroughs but hopefully gradual progress, one patient at a time, one month at a time.

Spark Therapeutics is expected to present initial results for its hemophilia A program (wholly owned). Data will surely be compared with BMN-270’s data, especially FVIII expression and immune response. An update for the hemophilia B program will focus on durability and Pfizer’s registration plans. Toward the end of the year, the FDA may convene an advisory committee on Luxturna for RPE65-related retinal diseases. Approval is expected shortly after.

Biomarin is expected to present an update from BMN-270’s hemophilia A study. Investors will focus on durability but also on safety profile in patients who achieved higher than normal FVIII levels. The company expects to launch a multi-site P3 (current data are from a single site in the UK) that will enroll ~100 patients. Primary endpoint has not been disclosed but will probably include bleeding rates and safety measures.

Bluebird is expected to present initial data with an optimized protocol (“process 2”)  of Lentiglobin in SCD patients at ASH (December 2017).  Although investor attention shifted to the company’s multiple myeloma CAR program, there is still a lot of focus on the SCD study given the significant commercial opportunity.

Avexis is expected to provide an update from its P1, potentially on its next quarterly call this month. Focus will obviously be on durability of the clinical effect (motor and other developmental endpoints such a weight and feeding parameters). Later in the year, the company expects to get regulatory clarity from the FDA, which may allow filing based on P1 data.

The company also expects to enroll SMA2 patients (less severe form of the disease). Because SMA patients are older (most SMA1 patients die in infancy), AVXS-101 will be given intrathecally in this trial in order to minimize the required doses of drug. This illustrates the production challenges the industry is still facing.

Abeona will present updated results for ABO-102 in Sanfilippo A. Data are expected to include at least 6 patients (3 from the high and 3 from the low dose arms). It will be interesting to see the extent of HS reduction with the high dose at 6 months to understand whether the effect is real and whether there is a dose-dependent response. Cognitive and behavioral tests may also provide some efficacy signals. Importantly, the company is expanding the trial to an additional site which will make the P1 package more reliable (Avexis is getting a lot of criticism for having data from a single site).

If results with ABO-102 are compelling enough, Abeona should be in a position to start a pivotal trial in 2018. It also expects to put another gene therapy in the clinic, ABO-101, which targets Sanfilippo B.

REGENXBIO (RGNX) is expected to present preliminary data for its wet-AMD program, RGX-314 (AAV8), which started enrolling patients two months ago. By definition, the data set will be very preliminary and probably include a handful of patients with limited follow up. Avalanche, which merged with Adverum, tried a similar approach (subretinal injection, targeting VEGF) with a different vector (AAV2) but failed (despite some interesting signals in visual acuity and post-treatment Lucentis usage). Adverum is also developing a next-generation program that will be administered intra-vitreally, which is much simpler and less invasive than subretinal administration.

REGENXBIO is also expected to report initial results from its HoFH program, RGX-501 (AAV8). An efficacy signal in this indication should be apparent based on change in LDL-C levels.

Dimension Therapeutics (DMTX) – After axing its hemophilia B program, investors focus on the company’s OTC deficiency program. In contrast to the hemophilia B product that used AAVrh10, Dimension is using the more validated (for liver delivery) AAV8 capsid for the OTC program. The trial started in January 2017 so there should be enough follow up to see an efficacy signal. I like the program given the lack of competition and because it is targeting the liver. In addition, since the missing protein is an enzyme, even low quantities (AAV8 is considered less efficient than the new engineered vectors some are using) can have a meaningful clinical impact.

In the XLRS study, the drug is administered intravitreally   in contrast to other ophthalmic gene therapy programs where administration is subretinal. This adds another layer of risk although intravitreal administration is less invasive and safer. AGTC expects to present data for 12 patients. The achromatopsia programs are earlier in development and the company reported some issues with one of the trials following inter-patient variability which the company blames on differences in surgical techniques.

Adverum (ADVM) expects to start P1 for its A1AT program (ADVM-043) in Q4 2017. ADVM-043 is also based on the AAVrh10 but Adverum plans to inject it directly to the lungs. The company also has a preclinical program (ADVM-053) for the lucrative HAE market (Shire’s Cinryze, Firazyr, Kalbitor are expected to generate >$1.5B in 2017). ADVM-053 is expected to enter the clinic towards the end of 2018. Despite its immature pipeline, I plan to hold Adverum into 2018 given its differentiated pipeline, its solid cash position and negative enterprise value (expected to end 2017 with $165M, higher than current market cap of $110M). On the manufacturing front, Adverum has internal production capabilities using an insect based system (baculovirus/Sf9) which has the potential to generate large quantities of vectors compared to standard production systems (HEK293, adherent or in suspension).

Audentes (BOLD) has two programs that are expected to enter P1 this year: AT132 (AAV8) for XLMTM (a rare muscle disease) and AT342 (AAV8) for Crigler-Najjar Syndrome (a rare metabolic disease). Among the muscle wasting diseases XLMTM represents a smaller opportunity compared to DMD, but one potential advantage XLMTM has is the fact that the missing gene is an enzyme, so even marginal expression levels may be translated to a clinical benefit. Given its early stage, company’s valuation ($570M) is relatively high.

I am initiating a position in Sunesis (SNSS), which recently started a P1b for its next-generation Btk inhibitor (SNS-062). I wasn’t aware of the program and just recently learned about it from a colleague (thank you, M.). SNS-062 will have to compete with Imbruvica (a $4B+ franchise) and other late-stage Btk inhibitors from AstraZeneca (AZN), Gilead (GILD) and Beigene (BGNE), which are all covalent irreversible Btk inhibitors. SNS-062 has a different mode of inhibition that may render it more active against the C481S mutation, which is less sensitive to covalent Btk inhibitors. ArQule (ARQL) and Redx Pharma are two other small biotechs with reversible Btk inhibitors. SNS-062 is slightly more de-risked because it was already evaluated in healthy volunteers with favorable safety and exposure data. 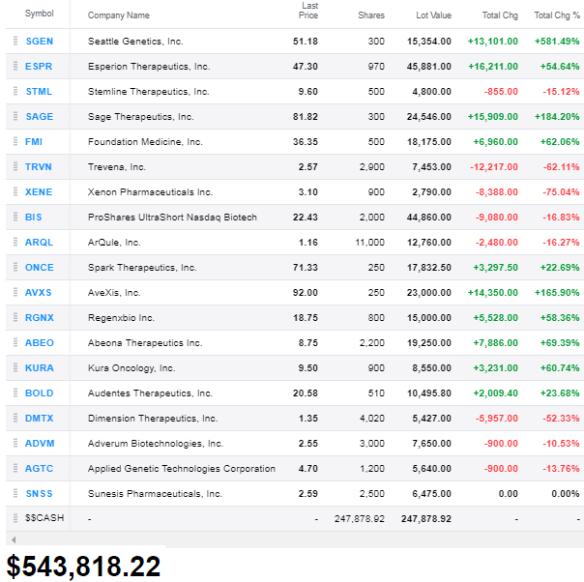