This year’s ASCO marks a second year in a row of relatively uneventful meetings, with very few groundbreaking or practice-changing data. Just like last year’s meeting, there were too many “me too” drugs targeting the same validated targets while results for truly novel MOAs were mostly underwhelming or immature. This stagnation is particularly troubling in light of the huge budgets the industry is pouring into oncology drug development, which used to be a highly capital-efficient sector.

Looking at the different vertical segments, stagnation is apparent across the board with some exception with few kinase inhibitors and BCMA CARs.

IO continued to dominate the meeting with PD-(L)1 antibodies as a backbone for combination trials. To date, no novel IO agent demonstrated robust single agent activity and this is still the case post-ASCO 2017. While some combination regimens generated interesting signals, efficacy data were mostly limited and immature.

Incyte’s (INCY) IDO inhibitor (epacadostat) was the most prominent IO agent with combination data across multiple tumor types. Keytruda + epacadostat generated a response rate of 33-35% in four tumor types (NSCLC, Head and Neck, bladder and renal cancer), which is numerically higher than the ~20% response rate typically observed in these indications with PD-1 agents alone. These data were the basis for a broad P3 program Incyte is pursuing together Merck. The market is clearly excited about epacadostat, evidenced by Incyte’s $28B market cap (probably more than half of which is ascribed to epacadostat). I find the results hard to interpret given the low sample size (~40 patients per cohort), the complete lack of single agent activity and the fact patients were not heavily pretreated.

Roche’s/Newlink’s (NLNK) data with their IDO program (navoximod) were underwhelming and led to the termination of the licensing agreement by Roche the following week. This was perceived as a positive for Incyte but it also casts a shadow on IDO as a target, especially in light of the table below Cantor prepared comparing epacadostat with navoximod in heavily pretreated patients, where efficacy appears modest for both agents (small numbers, cross-trial comparison….)

Beyond Incyte’s data there were almost no notable readouts from a host of PD-1 combination studies. BMS presented combination data for its LAG3 and GITR programs. LAG3+Opdivo demonstrated some efficacy in melanoma PD-1 failures but response rate in the overall population was still just over 10%. Tumors with higher LAG3 expression appeared to be more responsive but this needs to be corroborated.

The GITR study reported responses in 5 (13.5%) of 37 patients with solid tumors. There were no responses with Amgen’s (AMGN) GITR agonist antibody (AMG 228) as monotherapy, similarly to Merck’s GITR programs.

Syndax (SNDX) reported 3 (23%) confirmed responses for its HDAC inhibitor in combination with a PD-1 antibody in a cohort of 13 melanoma patients who had failed PD-1 antibodies. A fourth patient had an unconfirmed response. This response rate appears higher than the typically 10% but the small sample size makes data inconclusive.

Corvus (CRVS) presented an update for CPI-444 (A2A inhibitor) in renal cancer. Despite one partial response as monotherapy, overall efficacy was limited with a single-digit response rate in combination with Tecentriq. Celldex’s (CLDX) varilumab (CD27 agonist) demonstrated a ~9% response rate in combination with Opdivo in a mixed population of patients unlikely to respond to PD-1 monotherapy. Jounce (JNCE), which has a market cap of $530M reported P1 data for its ICOS agonist, where no responses were noted in 46 patients who received the drug alone or in combination with Opdivo.

The only truly impressive IO data set was for Bluebird’s (BLUE) anti-BCMA CAR in multiple myeloma (bb2121) with a 100% response rate in the 15 patients at therapeutic doses and what is emerging to be excellent durability. This is remarkable given the heavily pre-treated population (median of 7 prior lines). 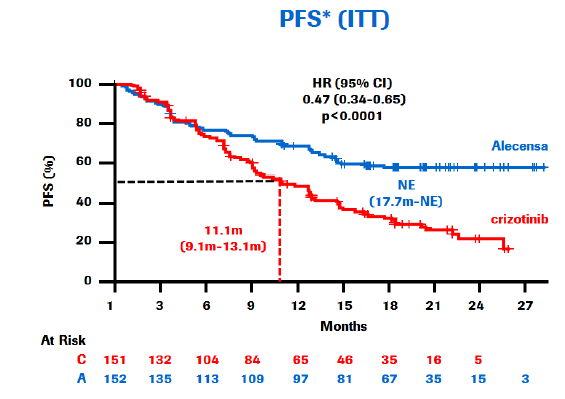 Loxo reported an impressive 78% response rate for its Trk inhibitor (larotrectinib) in TRK+ solid tumors. Durability of response continues to impress with the vast majority of responders still progression free (median not reached). Strikingly, efficacy was independent of tumor histology and was observed across tumor types. This will probably lead to a broad approval in any TRK-fusion cancer next year.

Blueprint Medicine reported a 60% response rate for its KIT/PDGFR inhibitor (BLU-285) in PDGFRa+ GIST. Despite the small addressable market (~2000 patients in US+EU), this patient population has no effective treatment alternatives and BLU-285 could reach the market next year based a small P2 study.

One interesting study that did not get a lot of attention was Roche’s P2 Lotus study which evaluated its Akt inhibitor (ipatasertib) in 1st line triple-neg breast cancer. The study generated a signal in tumors with dysregulated PI3K/Akt pathway (PFS HR= 0.44) which may be a basis for a P3 in a poorly served patient population (A P3 in prostate cancer just began). 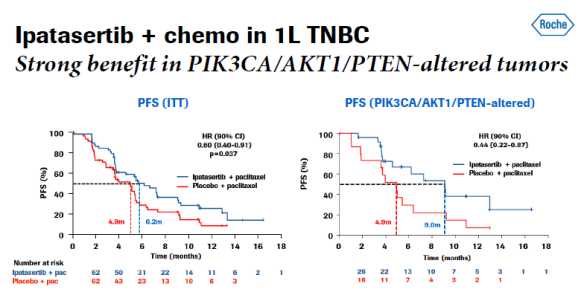 Akt was once considered a promising target, pursued by many companies but initial clinical data revealed limited efficacy as monotherapy and safety issues. Combining ipatasertib with chemotherapy coupled with a companion diagnostic for patient selection may be the way to realize the potential of Akt inhibitors. Although as single agents, Akt inhibitors are not nearly as effective as ALK or Trk inhibitors, the addressable population is dramatically larger.

This is good news for Array Biopharma (ARRY) which outlicensed ipatasertib to Roche and should be viewed as a positive read-through to ArQule (ARQL) which has two Akt inhibitors in clinical development and is pursuing a similar patient selection strategy.

On the antibody front, there was nothing earth shattering with ADCs or bispecific antibodies.

Immunogen (IMGN) presented pooled data for its FRa program (Mirvetuximab Soravtansine) in ovarian cancer, which validated the efficacy signal from last year with a response rate of 47% and a 6.7 month PFS in earlier lines (2nd-4th lines) ovarian cancer. This agent is clearly active but apparently less so in later stage patients, which led Immunogen to pursue approval based on a randomized P3 vs. chemotherapy. Mirvetuximab’s response rate and PFS are numerically higher than what has been seen with various chemotherapies in this setting but relatively low sample size (36 patients) makes it a tough call.

Seattle Genetics (SGEN) and its partner Astellas presented an update for their Nectin-4 program (Enfortumab Vedotin) in bladder cancer. Response rate was 41% in the overall population and a similar level of activity was maintained in PD-(L)1 failures (response rate of 44%). Duration of response and PFS (~4 months) were somewhat disappointing but the overall efficacy profile may enable the companies to pursue approval based on a single-arm P2.

Abbvie (ABBV) presented P1 data for two ADCs based on Seattle Genetics technology targeting cMET and EGFR, respectively. The cMET ADC demonstrated activity with a 21.5% (3/14) response rate. The EGFR ADC generated one PR in 42 patients. Similar to other MMAE-based ADCs, toxicity continues to be an issue as ADCs are still struggling with a narrow therapeutic window. Unfortunately this may also be the case with new payloads, based on Seattle Genetics’ announcement last week about discontinuation of SGN-33A’s P3 in AML.

On the bispecific front, Roche’s anti- CD3/CEA garnered a lot of interest going into the meeting but actual results in colon cancer were mixed. While there was some activity as monotherapy and in combination with atezolizumab (6% and 12%, respectively), it appears to be limited. Personally, I find it hard to get excited by a 12% response rate for a combination regimen but it was encouraging to finally see a bispecific antibody that can be dosed weekly and shrink solid tumors.

Spark (ONCE) filed its RPE65 product and will likely become the first ever FDA-approved gene therapy. Its hemophelia B program continues to look good with a meaningful and durable clinical effect. Avexis’ (AVXS) data in SMA1 continue to look promising (acknowledging the limited sample size) as the data mature and hopefully manufacturing issues are behind them. Abeona (ABEO) released new data for its Sanfilippo syndrome A program, demonstrating a clear pharmacodynamic effect and preliminary signs of clinical improvement or stabilization (see figure below). 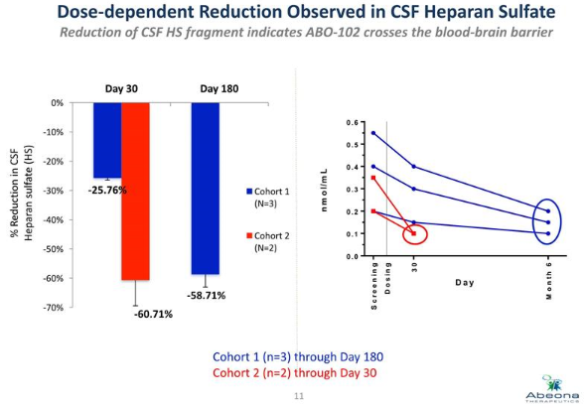 In an effort to diversify my exposure to gene therapy I am initiating a new position in AGTC (AGTC) and buying more Abeona (ABEO) and Dimension (DMTX).