Although this year’s ASCO contained a limited amount of groundbreaking data, it provided some interesting take-aways and signaled important trends in oncology drug development.  Below is my take on a quiet but important meeting.

Immuno-oncology – PD-1 combinations at their infancy

As in previous years, the meeting was dominated by PD-1/PD-L1 antibodies. Now that PD-1 blockers have been tested on every tumor known to mankind (see below a great figure from Merck), focus is shifting to combination regimens with PD-1 as a backbone. Combination partners range from other immune checkpoints to chemotherapy, targeted therapy and radiation.

The most active strategy is combining PD-1 antibodies with other immuno-oncology agents (CTLA4, IDO, OX40, KIR, 41BB, LAG3, CD27 etc.). After none of these drugs was able to come close to efficacy demonstrated by PD-1, there are now tens of different combinations in clinical development (including some in P3). The only validated combo is Opdivo+Yervoy in melanoma. At the meeting, BMS (BMY) presented data for this combination in SCLC and gastric cancer but in both cases results were underwhelming and the combination appears only slightly better in SCLC (overall survival of 6-7.7 months). 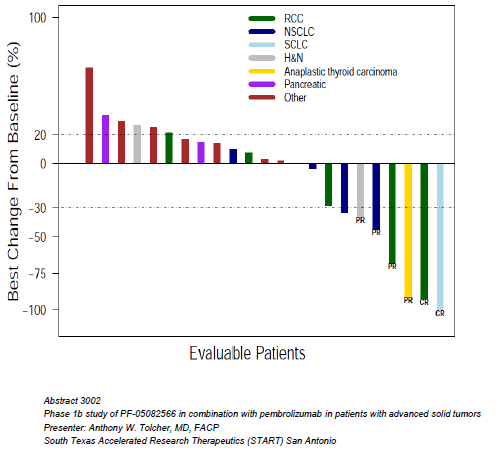 IDO was the elephant in the room – Incyte’s (INCY) IDO inhibitor (epacadostat) is in multiple open label combination trials with various PD-1 inhibitors, however, no data were reported at ASCO. IDO is still regarded as a promising target but excitement waned considerably after last year’s SITC, where epacadostat+ Keytruda demonstrated lower than expected efficacy. Incyte and Merck recently advanced the combination to P3 in melanoma.

Roche is evaluating its IDO inhibitor (GDC-0919, licensed from Newlink Genetics [NLNK]) with atezolizumab in a trial that started in July 2015.

Chemo combinations – Chemotherapy combinations continued to demonstrate intriguing but preliminary efficacy, especially in 1st line NSCLC.  For some combinations, response rates were higher than historical data but results were hard to interpret without a control arm, especially in light of inconclusive PFS figures. The role of PD-1+chemo in lung cancer will become clearer next year as multiple P3 trials exploring this approach are expected to read out. Later in 2016, Merck will have an interesting readout from a P3 evaluating Keytruda vs. chemotherapy in 1st line NSCLC. This trial could provide context for understanding if chemotherapies are really needed for 1st line and whether patient selection based on PD-L1 status is needed.

Roche presented P1 data for its PD-L1+MEK (atezolizumab+cobimetinib) combination in colorectal cancer in mismatch-repair proficient KRAS+ tumors.  The combination led to a 20% (4/20) response rate, which is not spectacular but significantly better than the expected ~0% in this population with either drugs alone. This study is important because it suggests that some drugs may be synergistic with PD-1 and that MEK inhibitors are potential “PD-1  potentiators”, as has been shown in preclinical experiments (it is still impossible to distinguish between direct anti-tumor activity and the alleged immunologic effect cobimetinib had). Although three patients were on study after 13+ months, the median PFS for the entire patient population was only 2.3 months (the only approved agent in this setting is Stivarga which demonstrated a PFS of slightly less than 2 months).

A P3 for the combination has been initiated based on these preliminary data. This is good news for Exelixis (EXEL) which has a 30-50% U.S. profit share, and double digit ex-U.S. royalties on sales of cobimetinib. 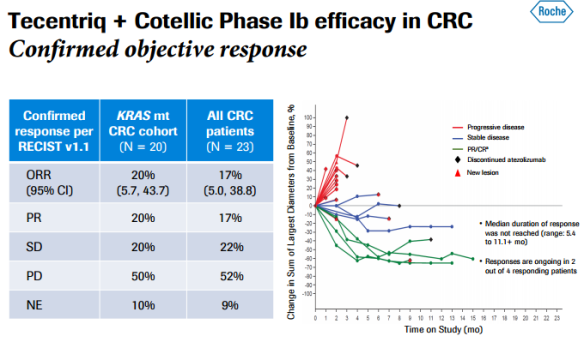 Array (ARRY) presented mixed results for its MEK inhibitor (binimetinib) in NRAS+ melanoma. Although the drug increased PFS compared to chemotherapy, there was no overall survival benefit. While an approval based on PFS is still possible in this tough indication, binimetinib’s value proposition is probably limited as monotherapy. Combination with checkpoint inhibitors may provide a more attractive avenue, especially in light of Roche’s data with cobimetinib.

The next big event on Array’s horizon is P3 data later in 2016 for its second MEK inhibitor (selumetinib), partnered with AstraZeneca (AZN). The drug is being evaluated in KRAS+ NSCLC, which represents a $1-2B commercial opportunity.

Investors were disappointed with Rova-T (anti-DLL3 ADC), the primary asset of Stemcentrx for which Abbvie (ABBV) paid $5.8B upfront and $4B in potential milestone payments. Despite a 39% response rate in a subset of SCLC patients (n =26) with high DLL3 expression, the data set is still early and it is unclear whether activity will be corroborated in larger studies (see Immunogen’s case below…). If Rova-T eventually reaches the market in DLL3-high SCLC (less than half of SCLC cases), Abbvie’s cost would probably reach ~$7B, more than the market caps of Agios (AGIO), Bluebird (BLUE) and Ultragenyx (RARE) combined.

Immunogen’s (IMGN) update on its FRa ADC (mirvetuximab) was also disappointing with an updated response rate of 26% in the overall population (down from 35% at the last update). More problematic was the lack of correlation between FR expression and responses, which had been observed earlier and is now almost gone (See table below from RBC).  This led Immunogen to change its registration strategy and pursue regular approval in less advanced patients who (unsurprisingly) appear to derive more benefit from mirvetuximab. Without a biomarker defined subset of last line patients, development risk and timelines associated with this program are now significantly higher.

Seattle Genetics (SGEN) had a positive update for two ADC programs with Astellas (ASG-15ME and ASG-22ME), which generated a 28-32% response rate in bladder cancer.

For anyone who has been following the antibody segment, ASCO 2016 provides an interesting observation about the therapeutic utility of naked antibodies compared to that of next-generation formats. Since the early 2000’s, the oncology industry shifted its focus dramatically from naked antibodies (like Herceptin and Erbitux) to “armed” formats such as ADCs and bispecific antibodies. Although the latter are orders of magnitude more potent, their clinical development has been plagued with issues like toxicity and short half-life, which in turn led to a very low success rate.

In contrast to the disappointing data with ADCs, this year’s ASCO included impressive data sets for two naked antibodies: Darzalex and IMAB362.

Genmab (GEN.CO) and J&J (JNJ) presented P3 results for Darzalex (daratumumab) in multiple myeloma, where the drug led to a dramatic increase in PFS (HR=0.39) when added to Velcade. Another trial evaluating Darzalex with Revlimid generated a similar effect with results expected later this month. Citi’s analyst Amalan R. Selvarajah now expects the drug to become a >$10B franchise (see figure below). Sanofi and Immunogen have a CD38 antibody with similar efficacy in P1 as monotherapy and in combination but development timelines with this antibody (isatuximab) are unclear. 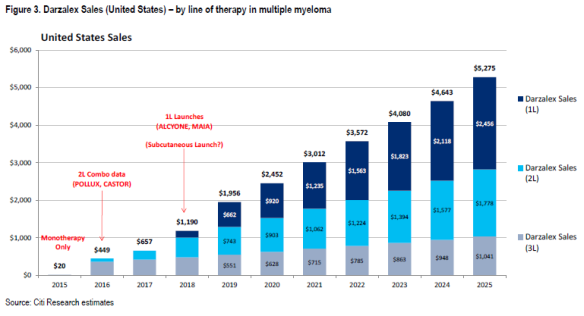 Privately-held Ganymed presented a robust overall survival benefit for its anti-Claudin18.2  antibody  (IMAB362) in gastric cancer. The 161-patient trial evaluated IMAB362 when added to standard chemotherapy and demonstrated an increase of 4.8 months in overall survival (HR 0.51, p=0.0001). The benefit was even more profound in patients with higher expression levels of Claudin18.2.

Five Prime (FPRX) presented positive preliminary data for its FGFR2B+ antibody (FPA144) in gastric cancer. Of 9 gastric patients whose tumors express  FPA144’s target 3 had a PR and another patient had an early unconfirmed response.

Exelixis presented P3 results for cabozantinib in renal cancer. As the drug already received FDA approval, most of the data had been released in advance, including a strong survival benefit (21.4 vs. 16.5 months, HR=0.66) and a clear win across all other endpoints. Last month, Exelixis announced another positive readout from a randomized P2 (CABOSUN), which evaluated cabo vs. Sutent in 1st line RCC. No numbers were given but the company disclosed that cabo led to “a statistically significant and clinically meaningful” improvement in PFS. This is the first time any drug beats Sutent in 1st line RCC, which could eventually support utilization in 1st line RCC ($1.5B opportunity).

As an oral drug with a better HR than Opdivo (0.66 vs. 0.73), a clear win over Sutent in 1st line, and significant improvements in response rate and PFS, cabo should become a (if not the) leading treatment option in renal cancer. Recent strength seen with the stock reflects increased investor confidence about cabo’s market positioning vs. Opdivo. For the rest of 2016, investor focus will be on the US launch (approved since April 25), EMA approval (expected imminently), CABOSUN data, a licensing deal in Japan and a restructuring of Exelixis’ long term debt which is still a major overhang.

This year’s ASCO saw the first head to head P3 for a biosimilar antibody, Mylan’s (MYL) version of Herceptin. The biosimilar was compared to Herceptin in a 456-patient trial and demonstrated similar efficacy (response rate) and safety profile. Mylan plans to submit its Herceptin biosimilar, which is already commonly used in India, to the FDA this year but it is still unclear whether it will be allowed to launch the drug in the US before 2019. This is probably the first of many attempts by biosimilar companies to capture market share from Roche’s three leading biologics: Herceptin, Rituxan and Avastin (combined annual sales of $20B). Of the three, Avastin looks like the most vulnerable one with no apparent successor in Roche’s pipeline.