Post-surgical pain is not the first indication people think about in the context of innovative drugs. From an investor standpoint, pain in the acute care setting is perceived as a temporary, symptomatic hospital-related issue with a poor value proposition. Some may even claim the unmet need is limited given available treatments (especially opioids). This is demonstrated by Trevena’s (TRVN) modest market cap ($264M) despite a positive clinical signal, an ongoing phase 2b and a potential FDA approval within three years.I believe that Trevena’s current valuation undervalues the commercial opportunity and the need (both medical and commercial) for better post-surgical pain solutions. Trevena’s lead program (TRV130), which represents a scientifically innovative approach for an old target, already generated preliminary clinical proof of concept that supports the company’s hypothesis. Pending validation in P2b later this quarter, TRV130 may emerge as a best-in class opioid with a ~$2B potential globally.

Pacira’s (PCRX) is one the few successful post-surgical pain stories based on a strong launch and a market cap of $2.25B (after a 50% drop this year). Its marketed product, Exparel, is a sustained release version of a generic analgesic (bupivacaine) which is injected locally at the surgical site to provide sustained pain relief. Exparel’s primary selling point is its ability to substitute opioids,   which are very effective but are typically reserved as a last resort due to side effects (respiratory depression, drowsiness, vomiting, and constipation) and related complications.

Ultimate goal is minimizing opioid use

The primary motivation behind drugs like Exparel and TRV130 is the problematic safety profile for opioid drugs (e.g. morphine). When used, opioids are carefully managed by doctors who have to balance between safety and efficacy, especially in high risk populations. From a cost perspective, opioid use leads to increased cost due to longer hospitalization and a higher risk of complications.

Pacira’s claim to fame, which is supported by multiple studies, is the ability of Exparel to reduce opioid use in patients who undergo surgeries like knee replacement, colectomy and hemorrhoidectomy.  While Pacira tries to minimize opioid use, Trevena tries to replace opioids with TRV130, which activates the same target opioids do (μ-opioid receptor) but in a more selective manner. The scientific rationale is activating a certain component of the receptor in a more selective way which may translate to a better clinical profile (better efficacy with a similar side effect profile or similar efficacy with a superior side effect profile). In other words, TRV130 may be the first opioid that uncouples some opioid-related side effects from the analgesic effect.

It is important to note that even when Exparel is used, a significant portion of patients require opioids to treat post-surgical pain so the market for a better/safer opioid definitely exists.

TRV130 was tested in a P2 bunionectomy study where the drug demonstrated quick and profound pain reduction that was superior to morphine. The graph below presents TRV130’s effect on pain as reported by patients (on a 0-10 scale). Patients started the trial with significant pain intensity (~7, with 10 referred to as “worst pain imaginable”). TRV130 demonstrated an immediate and dose-dependent reduction in pain score with a striking 5.5-point reduction for the highest dose. The two highest doses had a statistically significant improvement over morphine, which reduced pain intensity by only 2 points. 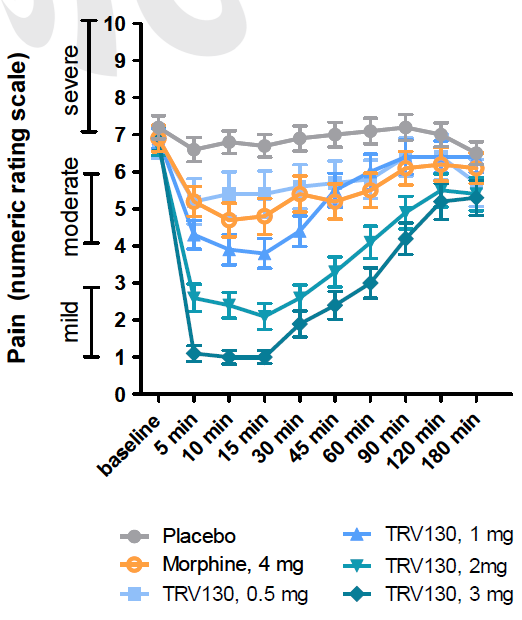 The company did not present the complete safety data but disclosed “trends towards better safety than morphine with similar tolerability”. The safety endpoint was respiratory depression, which appears numerically better (but is this statistically significant? See figure below). Tolerability probably refers to classic opioid-related side effects (nausea, drowsiness, vomiting). The company did not break down side effects for the different doses, so it is not clear whether “similar tolerability” refers to the pooled data or the higher doses. There is always a concern that TRV130 is not differentiated from morphine and that the efficacy advantage came at the expense of lower tolerability (which can also be achieved with higher doses of opioids on the market). Although it is reasonable to expect high doses of TRV130 to lead to more adverse events, what matters is finding a dose with a clear advantage over morphine.

US hospitals are evaluated by the HCAHPS (Hospital Consumer Assessment of Healthcare Providers and Systems) survey based on patient feedback. The scores, publicly available on Medicare’s website (see link), influence patient preference as well as overall reimbursement programs.

Importantly, pain control is the only clinical metric surveyed by the HCAHPS questionnaire (the rest of the questions are about quality of service and communication with caregivers). This makes pain control a crucial element in hospitals’ reputation with a direct impact on commercial performance via patient preference and reimbursement. Therefore, a drug that can deliver superior pain reduction even with a similar adverse event profile may still experience broad adoption by hospitals.

Later in the quarter, Trevena will report results from a phase 2b abdominoplasty trial in 200 patients. The study will compare TRV130 to morphine or placebo but instead of using fixed doses, the drugs will be administered via patient controlled analgesia device (PCA). An advantage over morphine in pain management or safety profile should justify advancing to phase 3.

The trial also exemplifies the short development timelines for drugs used in the acute care setting. Trevena initiated the trial in December 2014 and expects to have top line results in ~9 months. If P2b data are positive, confirming them in pivotal trials could take less than a year.

We are selling our position in Incyte (INCY) for a profit of 1994%. Although Incyte is a great company with multiple high quality assets, it is hard to justify a $21B valuation based on its existing pipeline. 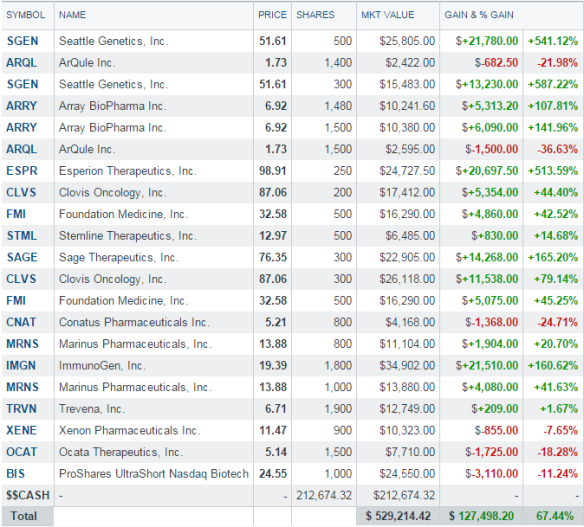 76 thoughts on “Trevena – Late stage innovation flying under the radar”