Back in 2010, ADCs were the hottest theme in oncology with the potential to revolutionize cancer treatment. The excitement was based on promising results for Adcetris (Seattle Genetics [SGEN]) and Kadcyla (Immunogen [IMGN]), both of which utilized new and improved ADC technologies. Adcteris and Kadcyla were perceived as the ultimate cancer drugs: They had strong single agent activity and provided meaningful benefit to patients with limited toxicity. All that was left to do was replicating their success with additional antibodies to cover every tumor type.

Five years and more than 20 ADCs later, it is clear that ADCs failed to deliver on their promise. Adcteris and Kadcyla remain the only ADCs with a truly promising clinical profile (i.e. strong efficacy in a large number of patients) and sentiment towards ADCs is at a multi-year low, evidenced by the poor stock performance of Seattle Genetics and Immunogen despite an unprecedented tide across the biotech sector.

The rise of immuno-oncology can be blamed to some extent, however, it is clear that ADCs have encountered fundamental setbacks. Although most ADCs which entered clinical testing demonstrated some activity, response rates were typically low (5-10%) and toxicity issues were common. The few cases of high response rates came with a high toxicity price (Anti-CD79b) or observed in retrospectively-defined subsets in a small number of patients (Anti-GPNMB, anti-NaPi2b).

Deep in the trough of disillusionment

From an investor perspective, it is still unclear whether ADCs are simply not attractive enough as a class or whether they are experiencing the typical innovation cycle seen with other novel technologies (siRNA, gene therapy, immuno-oncology). According to the innovation cycle template, promising technologies often generate over-optimistic expectations that fail to materialize in the short term. This leads to exaggerated pessimism (trough of disillusionment) followed by gradual fundamental advances that facilitate long-term success. 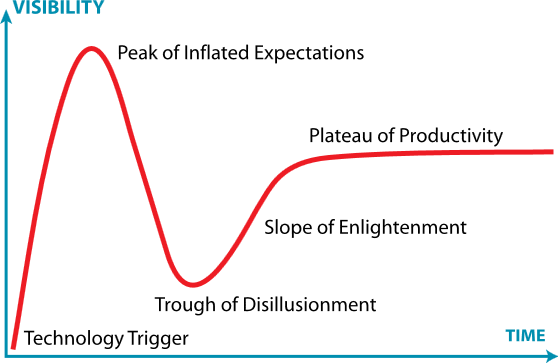 If one believes ADCs will eventually play a role in oncology, investing in the ADC theme now after expectations have hit rock bottom may be extremely rewarding. Given the disappointing experience with ADCs to date, the only thing that can reverse the negative sentiment is meaningful and unequivocal clinical data with one or more new ADCs. This might happen in 2015 and could represent the turning point from the “trough of disillusionment” to the “slope of enlightenment”.

I am still bullish on ADCs long-term for two reasons:

1) Statistically, as more ADCs enter clinical testing, there is a higher likelihood of seeing a “Kadcyla-like” profile.

2) The industry has been developing new technologies that could serve as the basis for improved ADCs with better activity in humans. These include new payloads, new linkers and site specific conjugation.

SGN-33A (Anti-CD33) – This is Seattle Genetics’ biggest hope for 2015. CD33 has been considered an attractive target for AML for over a decade based on efficacy observed with Mylotarg, an anti-CD33 ADC based on an old technology from Wyeth. Mylotarg was withdrawn from the market in 2010 after disappointing P3 data but later studies with lower doses demonstrated a clear clinical benefit (but also more toxicity). Sanofi (SNY) and Immunogen had an anti-CD33 ADC in development, which was better tolerated but had limited efficacy (attributed to payload selection).

SGN-33A utilizes two technical improvements that may enable to optimally target CD33: A novel DNA-binding payload (higher potency relatively to currently used tubulin binders) and site-specific conjugation (better safety profile). Preliminary data presented at ASH 2014 demonstrated clear and dose-dependent activity with a relatively mild safety profile. CR rate was 27% for the top three doses, with additional 50% of patients experiencing significant reductions in tumor burden. These data are encouraging but not sufficient to understand whether SGN-33A is effective enough to merit further development as monotherapy. Future updates in 2015 will shed more light in terms of durability of responses and long-term safety profile.

IMGN853 (Anti-FRa) – IMGN853 is Immunogen’s most advanced wholly-owned ADC in development targeting folate receptor alpha (FRa). Preliminary phase I results were presented 2 years ago and demonstrated encouraging signs in gynecologic tumors (2 partial responses) but also dose limiting ocular toxicities at the higher doses. Since then, Immunogen has been working on identifying a dosing regimen that minimizes ocular toxicity by decreasing early exposure levels. In 2014, the company presented preliminary results with alternative dosing regimens that support this hypothesis, but no efficacy data were disclosed.

At the last quarterly call, Immunogen’s management was upbeat on IMGN853, indicating that efficacy seen to date may be strong enough to justify accelerated approval based on a single-arm phase II in ovarian and/or endometrial cancer. Although the company did not provide actual numbers, a 30-40% response rate was mentioned as the required efficacy to pursue accelerated approval as monotherapy for ovarian cancer. Results will be presented at ASCO 2015 (May 29-June 2) and need to demonstrate a reasonable safety profile as well as a 30%+ response rate in order to keep investors excited with IMGN853.

Lifastuzumab vedotin (Anti-NaPi2b) – Roche is evaluating lifastuzumab vedotin (based on Seattle Genetics’ technology) for ovarian cancer. Phase I results at ASCO 2014 demonstrated a 41% (7/17) response rate in ovarian cancer patients with high expression of NaPi2b and a 10% response rate in NaPi2b+ lung cancer. This led to the initiation of a randomized phase II comparing lifastuzumab vs. Doxil in ovarian cancer, with data expected later in 2015. Positive results could lead to a phase III trial with a high likelihood of success.

There are many other ADCs which entered clinical testing in 2013-2014 and could generate data in 2015. Phase I data are preliminary by definition but good oncology drugs can demonstrate impressive efficacy early on.

Seattle Genetics may have phase I readouts for its proprietary LIV1 program as well as multiple partnered programs including Pfizer’s anti-5T4 and anti-NOTCH3, and anti-TF (Genmab).

Immunogen’s partnered pipeline is less advanced as it relies on Novartis’ (NVS) and Lilly’s (LLY) preclinical programs. Novartis started phase I with for LOP628 (anti-cKIT) in January 2015 but the study is listed as suspended as of March 2015. Two additional programs  targeting P-cadherin and FGFR2/4 are going to be presented at AACR.

Phase III data for Kadcyla in HER2+ gastric cancer is another important readout for Immunogen, expected to occur in the coming months.

61 thoughts on “Will 2015 mark the turnaround for antibody-drug conjugates?”