Last weekend, Synta (SNTA) reported updated results from a randomized phase II evaluating ganetespib in NSCLC (non-small cell lung cancer). Although the data set demonstrated a survival signal that merits advancing ganetespib to phase III, results were worse than last year’s interim analysis (discussed here). This triggered a sell-off in the stock, which was down 39% this week.

Putting disappointment aside, the clinical profile that emerges from the updated results is positive and should be regarded as reliable given the large size of the trial (252 patients). If these results are reproduced in the ongoing phase III, ganetespib will likely become a commonly used drug in 2nd/3rd line NSCLC patients with a clinical profile that resembles that of Avastin (Approved for 1st line NSCLC).

Following the recent sell-off, Synta is undervalued even when applying a more conservative probability-adjusted valuation method that factors in the recent data. In addition, the market appears to ignore additional potential indications where ganetespib will likely have a role, especially ALK/ROS/RET mutations in lung cancer.

The trial accrued 252 patients who received Taxotere or Taxotere + ganetespib. Ganetespib led to a 2.4 month improvement in median overall survival (9.8 vs. 7.4 months) but the difference was not statistically significant (it trended towards significance, p=0.082). Importantly, there was a statistically significant improvement in progression-free survival (PFS) from 3.2 to 4.5 months (p=0.038).

Activity was more pronounced in patients who did not rapidly progress on 1st line treatment (non-rapid progressors, accounted for 70% of participants). In this subgroup, ganetespib led to a statistically significant 4-month survival benefit, which prompted Synta to focus on this subgroup in the phase III. While this decision has the potential to improve the outcome, it is based on a retrospective subset analysis that should be treated cautiously.

As a standalone observation, the survival signal in the “intend-to-treat” (ITT) population is positive, but it is worse than that reported at the previous update at ESMO 2012 (see table below). Although the estimated medians remained similar (2-3 month difference), the hazard ratio (HR), which captures the entire difference between the survival curves (not just at the medians) deteriorated.

At the prior analysis, HR was 0.688 for the entire population and 0.568 for patients with a follow up of >6 months. The recent analysis showed a HR of 0.82. Since it was conducted when all patients had a follow up of >6 months, this represents a substantial increase (The lower a hazard ratio is the better), leading some to suggest that the survival benefit is diminishing as the trial progresses and is not likely to be replicated in the phase III trial. (See Adam Feuerstein’s write up)

There was also skepticism around the signal in non-rapid progressors because survival in patients who received Taxotere was 1 month shorter than the ITT Taxotere arm. Since these patients have more indolent disease, they are expected to have better survival, not worse.

Ganetespib could still have an “Avastin-like” profile

The most important and reliable piece of data remains the ITT survival analysis, as it represents an objective prospectively defined endpoint from a fairly large sample size. In order to put ganetespib’s results in context, it should be analyzed in light of the only targeted therapy approved in combination with chemotherapy for NSCLC. Similarly to ganetespib,  Avastin was evaluated in predominantly adeno patient population and was given as maintenance.

It is important to stress that I am not trying to directly compare the 2 drugs as they have been evaluated in different settings (e.g. treatment line, backbone chemotherapy). Instead, the comparison gives a sense for how an active targeted therapy behaves when added to chemo in NSCLC.

As can be seen in the table below, both agents generated a similar survival benefit and hazard ratio. The median PFS benefits appear numerically comparable (both statistically significant) but Avastin has a better hazard ratio as well as response rate difference.  Obviously, Avastin’s data is from a large phase III trial, which was powered to show a statistically significant survival benefit. Ganetespib’s data is from a smaller phase II trial that has to be validated in phase III. Synta’s decision to limit recruitment to non-rapid progressors may limit ganetespib’s market potential but may also lead to a more profound effect.

Ganetespib did not meet investors’ expectations but the phase II trial generated a clear survival signal that trended towards statistical significance. As the trial was larger than similar trials in NSCLC (e.g. Metmab, tivantinib), the survival signal appears reliable. The activity in non-rapid progressors is impressive but should be taken with a grain of salt.

In order to reach a price target, I decided to use a more conservative probability-adjusted valuation which assumes only a 20% likelihood of success. These 20% include a scenario in which ganetespib has an “Avastin-like” profile (2-month survival benefit, HR 0.8) or an improved profile based on the non-rapid progressors cohort from the phase II (4-month benefit, HR 0.6). As can be seen in the table below, even when such a low likelihood of success is assumed, Synta’s market cap should be ~$600M solely based on this indication.

This excludes ganetespib’s potential in a group of rare mutations in lung cancer (ALK, ROS1 and RET translocations), representing ~7% of NSCLC cases. Activity for Hsp90 inhibitors in ALK+ patients has been demonstrated with 3 different inhibitors (Synta’s ganetespib, Infinity’s IPI-504 and Novartis’ AUY922) so it appears that this is a reliable class effect. There is still no published clinical experience in RET+ and ROS1+ patients but there is strong scientific rationale for why these fusions are dependent on HSP90. Earlier this year, Synta published preclinical results which demonstrate impressive activity of ganetespib in both mutations.

Lastly, Infinity (INFI) is expected to announce results from a phase II trial evaluating its Hsp90 inhibitor, IPI-504, in combination with Taxotere for NSCLC. Although there are trial design differences and IPI-504 is considered less potent and more toxic than ganetespib, it will be interesting to see if Infinity sees a survival signal (especially in adeno patients). 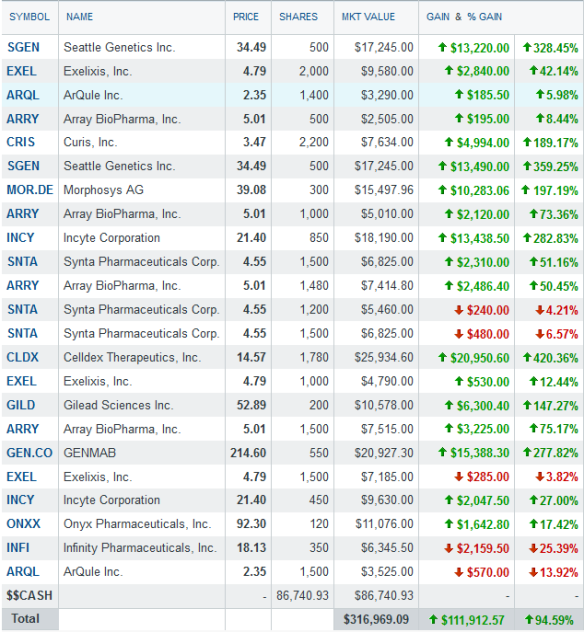